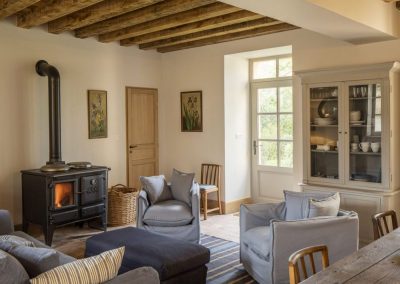 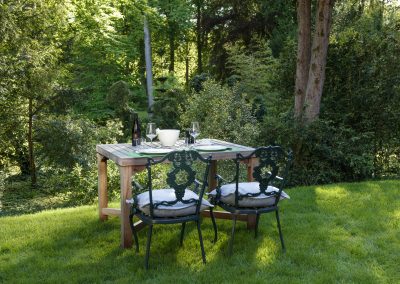 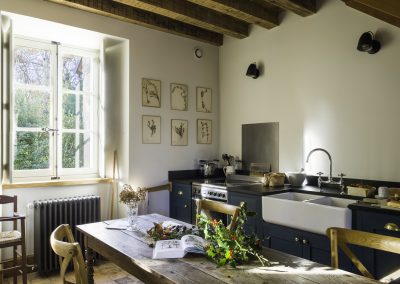 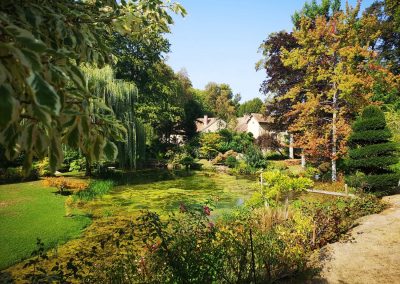 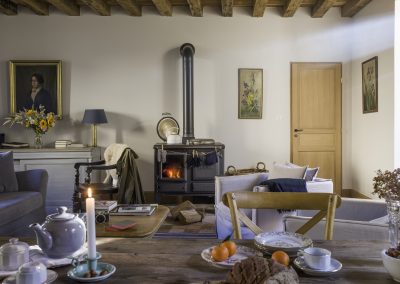 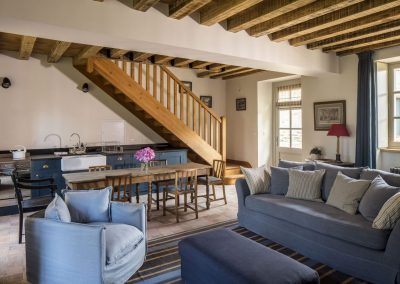 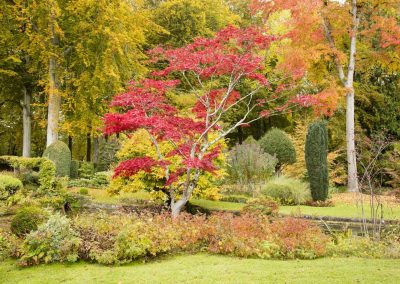 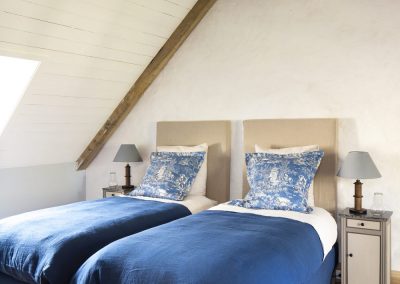 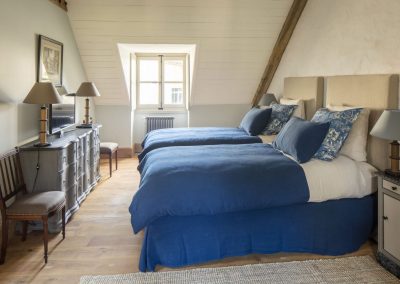 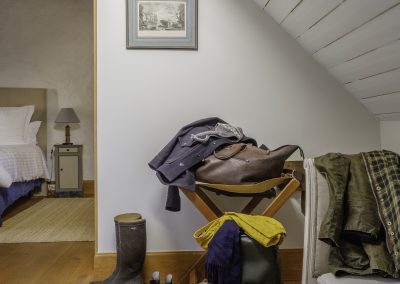 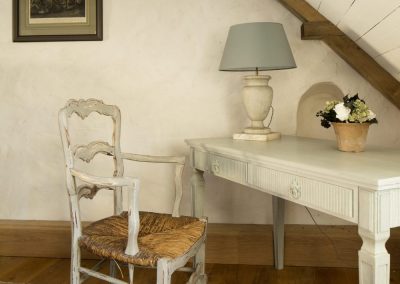 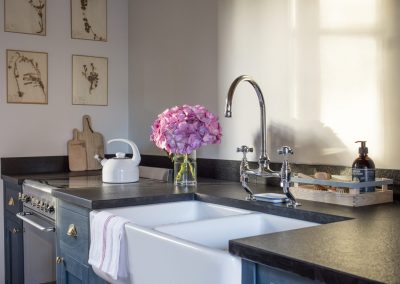 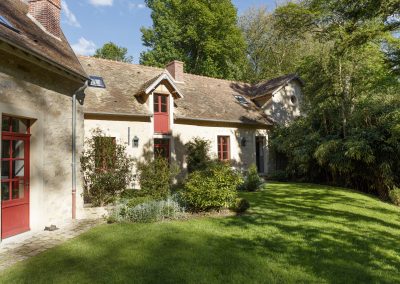 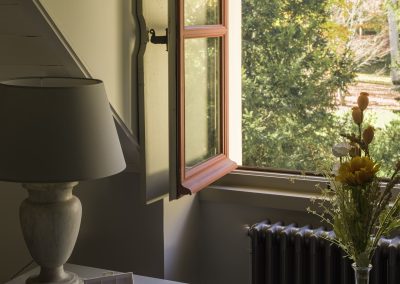 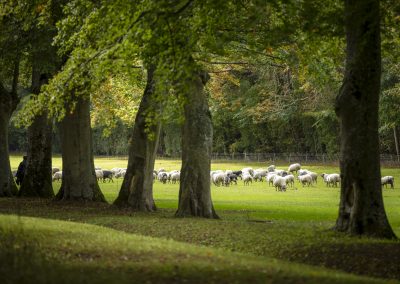 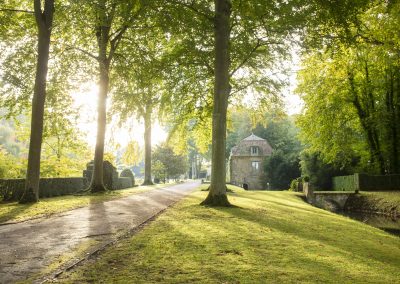 La Pompe du Hameau de Courances, with its elegant simplicity, offers the ideal parenthesis of a confidential weekend. This cozy house for two is nestled between le Moulin and l’Atelier. They can also be combined together to form one entity known as le Hameau de Courances. Enjoying fully the sun in your own private garden, being just a few paces away from the magnificent century old Japanese garden with its changing seasonal colors adds to the charm of the location. This historical outbuilding, formerly essential to the activity of the domain, is now a small charming sanctuary set in the heart of one the most beautiful historical domains of Ile de France. In the countryside yet not far from Paris, la Pompe de Courances is the perfect compromise for an unforgettable weekend. You will learn to love these quality moments!
Pierres d’Histoire has created the unique opportunity of a stay in an idyllic location for a relaxing weekend for two like you have never experienced before La Pompe, the domains hydraulic system in the past, has been transformed into a cozy nest for those sweet getaways. Just as in l’Atelier and in le Moulin, the quality of the materials as well as the elegant furniture, create a warm and countryside atmosphere. The kitchen on the ground floor opens to a vast living room where in winter, you can cuddle up in the super soft couch next to the lighted wood-stove. During summertime, relax in the private garden, these privileged moments are to be savored fully. If you wish to be just the two of you enjoying your privacy during the day but meet up with your family or friends in the evening, L’Atelier and Le Moulin can be reserved together. A perfect combination of privacy and a get-together. 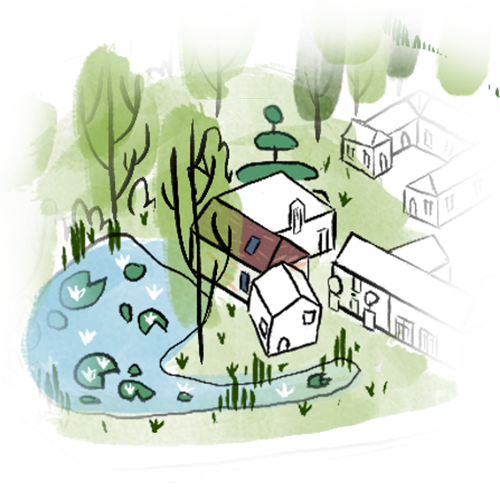 As soon as the warm weather is back, organize a picnic next to the Etang du Presbytère followed by a stroll in the Petit Parc of Courances, reserved exclusively for Pierres d’Histoire guests.
Take your bike, and just ride with no particular plan: pedal alongside the fields, follow the streams and rivers, cross the small stone bridges and discover the picturesque surrounding villages such as Dannemois, Moigny, Soisy, Cély and all the others ….
Lovers of Jean Cocteau’s art, might be surprised to find out that he spent the last years of his life in Milly-la-Fôret. His house is open to visitors and well worth a visit. As is the small Saint Blaise des Simples chapel where he painted all the stained-glass windows.

For your stay to be fully dedicated to relaxation, be sure to call Marine Le Gouvello, naturopath and yoga teacher who gives both private yoga lessons and massages. She works in Le Vivier de Courances, very close to la Pompe. Another choice is Marie Lanore who makes house calls.

Whether a gourmet or an unconditional food lover, be sure to go to Fontainebleau to discover Dardonville , one of the best bread shops in town, or the cheese shop Les Terroires de France . On Sundays, after the market, there is nothing better than to sit at the terrace of Rubis, watching the world go by, drinking an expresso or a typical French mint syrup cold drink “menthe à l’eau”.

The park as well as the outer walls of Chateau de Courances are inscribed as Monuments Historiques. Although the rest of the buildings of the domain are not listed per say, they are pretty much subject to the rules governing the Monuments Historiques in case of any works. When renovating the Hameau, the architect of the Batiments de France required, quite rightly, that the buildings keep the rural aspect of their original functions.

The restoration took eighteen months and needed about ten people. Manolo, the Courances gardener was hired to help. He knew everything there was to know about Courances and becomes little by little the site manager coordinating the different artisans: a plumber, an electrician, a carpenter who executed the door and window frames, the shutters and the staircases. A few masons and four other people who usually worked for the upkeep the Park of Courances were also hired.

Because of the proximity of the buildings to the water, the biggest difficulty of the work site was to clean up the foundations; without knocking down anything it had to be repaired from underneath so as to reinforce and protect it from the waters. This structural work implied moving … the Pump. It can be imagined how difficult it was to move such an imposing system. As for the very bad state of the paved court it was best to completely redo it. It was set in the traditional way, that is to say, on a bed of sand slightly treated with lime.

Following damages during World War II, some sections had been repaired in the seventies and eighties with concrete. When talks of restoration took place, there was very little if any, of the original elements that could have been used. However, it was obvious that high quality materials had to be used. This is why the walls were worked with whitewash and the floors covered with old terra cotta tiles. Insulation was done with hemp, a vegetable fiber known for its transpirant qualities. The regional park of Gatinais, in which sits the château de Couranes, has put in place a procedure for the availability of local hemp and encourages the use of this wonderful material that not only is very efficient but also perfumes pleasantly the walls.

Decorated both soberly and elegantly, each of the three houses have a particular charm and atmosphere. A place for the family or a group of friends, for relaxing, breathing, simply taking a pause.

The peacefulness of the Hameau de Courances comes very much because of the pretty paved courtyard. But also because of the grandiose beauty of a small hidden, private garden : THE Japanese garden, known to be one of the most beautiful of Europe. 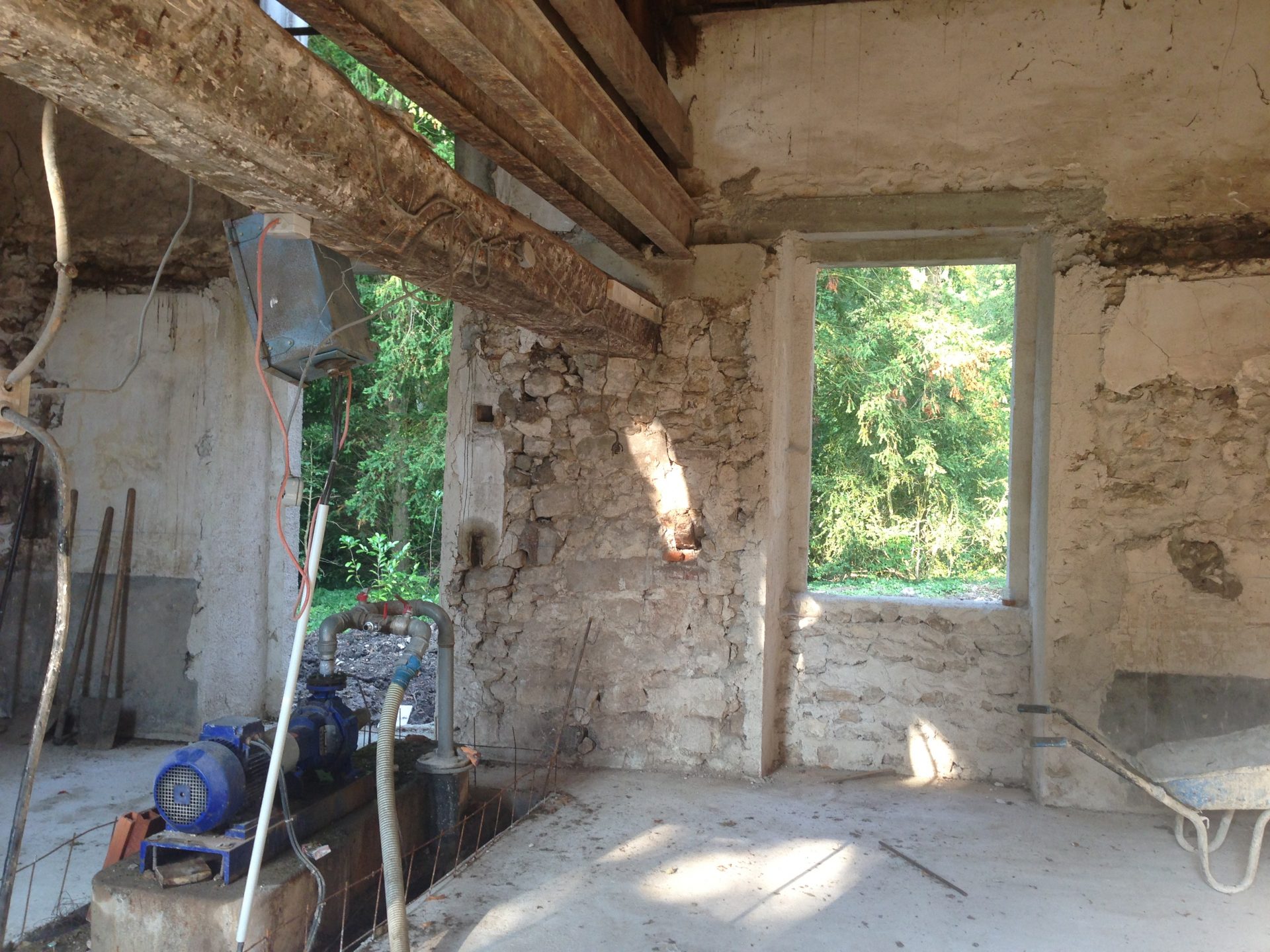