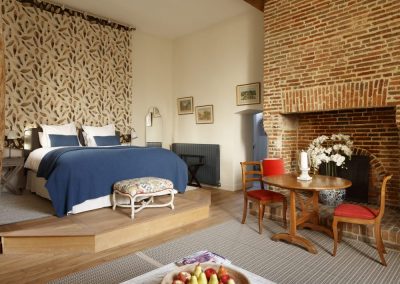 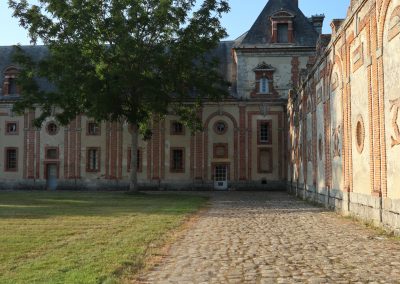 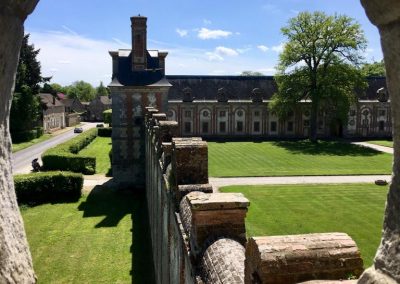 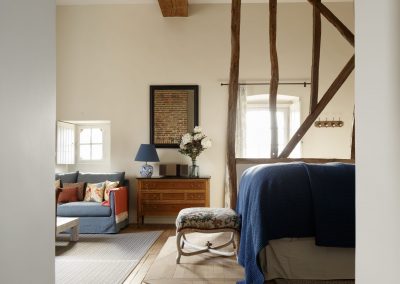 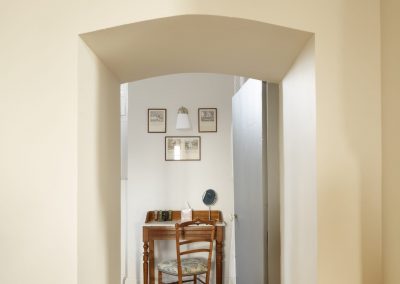 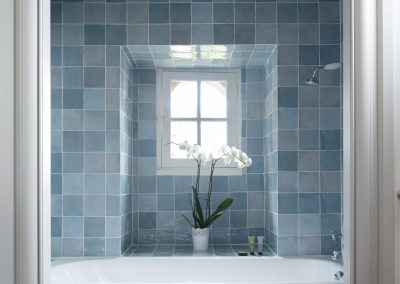 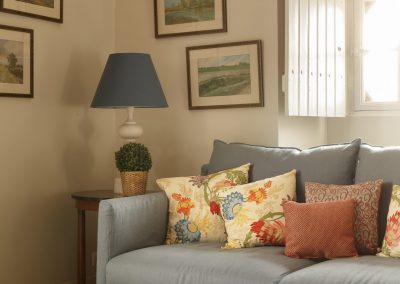 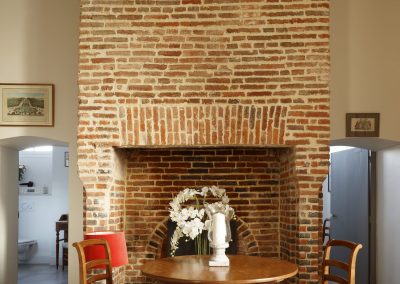 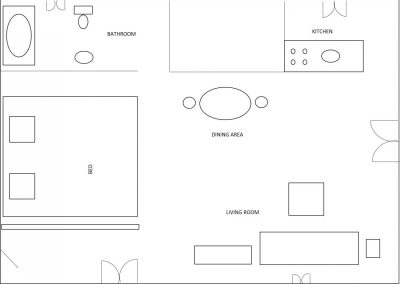 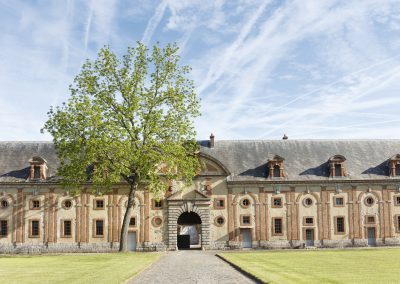 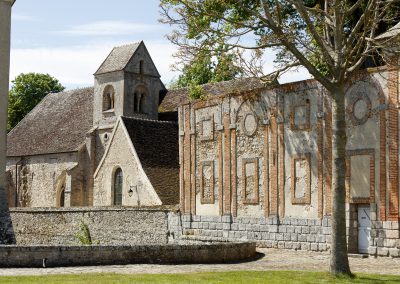 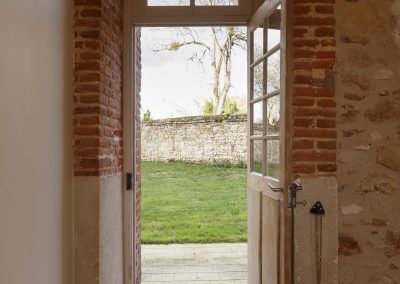 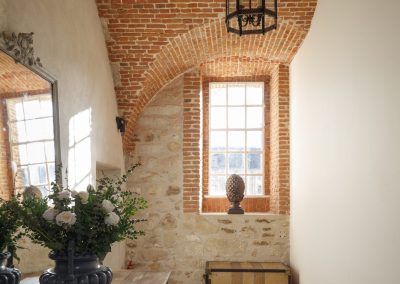 LOVELY SUITE FOR TWO AT THE TOP OF A GUARD TOWER

On the second and last floor of la Tour Nord, situated in one of the pillars forming an angle between the commons of the Château de Fleury and its ramparts, la Vigie is the place to feel like you are suspended in the heights. Overlooking both the court of Honor and the surrounding countryside, it is the perfect place to let go. To admire the breathtaking views of the countryside, the spectacular viewpoint of the court of Honor from the bull’s eye, or the peaks of the trees from the vast French windows. The atmosphere in this apartment bathed in light is soft and peaceful. Modern amenities are mixed with rougher materials such as lime and claustra wood to demarcate precisely the different spaces of the room. You will be surprised by the unusual bathroom: the bathtub is hidden behind an alcove decorated with Louis XIII moldings allowing you to relax in all intimacy.
You will be immediately seduced by the peacefulness of the place and its private access to the garden from the ground floor. You no longer need to go to the end of the world to experience an exceptional weekend; thanks to Pierres d’Histoire, unusual experiences are within your reach. 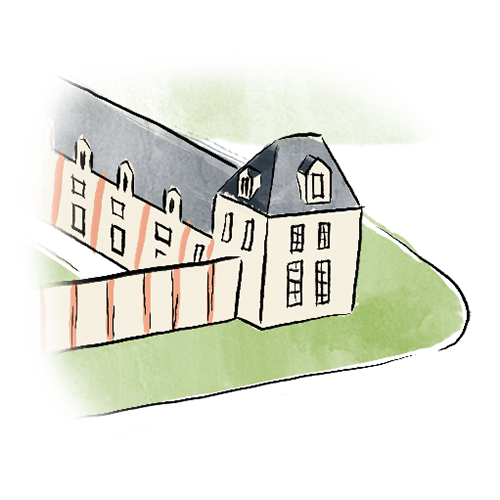 You’ve just arrived and it’s the weekend and you have nothing prepared for dinner? The Pizza de l’Olivier stands on the Place de la Mairie de Fleury-en-Bière every Friday till 9:00 p.m. The pizza de chef with an extra Brie cheese is really good.
Need to do some shopping? You can find all the food stores at Milly-la-Forêt but you should also know that a greengrocer can be found every Saturday till midday in the court yard of the school in Fleury, a five-minute walk from the château.
In Courances, Les Jardins de Courances is a must for local organic fruits and vegetables. The bread shop has wonderful country style bread but the best pastries come from Dardonville in Fontainebleau.

During the summer months, what you most want to do is laze around the small private garden reserved for Pierres d’Histoire guests. But then you could go to Barbizon and lunch at La Bohème Walk a little bit further on Grande Rue and you will reach directly the Fontainbleau Forest.

Love nature? Between the different rocks, the stretches of sand, ponds and moors, the landscapes, the fauna and plants there is a surprising amount of diversity in this forest making for continuous discoveries summer or winter.

Hedonists, check out the nearby restaurants : 77 Craft in Villiers-sous-Grez, Brasserie Ziegler in Nanteau-sur-Lunain, La Brasserie des Grottes and Brasserie Pachamama in La Genevraye.
Take a drive to the very well-known cheese shop in the region, from the Loiseau family who have been specializing in Brie de Meaux and de Melun for over a century.

And finally, don’t miss the beautiful walks in the unusual villages of Grez-sur-Loing, Moret-sur-Loing (home to Alfred Sisley), Saint-Mammes et Montigny that will continuously enchant you.

Pierres d’Histoire was immediately charmed by the old annexes that are the Ecurie and the Tour Nord. After restoring Poterne in 2016, the decision was made to exploit the potential of these annexes. They were rehabilitated into three exclusive suites, welcoming guests for what could be defined as an extraordinary stay in the heart of History.

The Ecurie with its orange colored stone vaults and its generous volumes is the perfect example of the exceptional architecture typical of the 17th century. The Vigie and the Tour, with their high ceilings, picturesque arrow slits and monumental fireplaces correspond entirely to Pierre d’Histoires’ vocation to perpetuate history by refurbishing these old buildings. The facades and the roofs have been on the Historical Monuments list since October 5th, 1951.

The Suites de Fleury were created in 2019. Located in one of the annex wings of the Tour Nord, facing the Château, the rooms where unoccupied and undecorated. Refurbishing took one year, with the ultimate goal of undergoing a complete renovation and yet keeping the spirit of the place untouched. The spacious volumes with the five meter high ceilings as well as their specific configuration had to be taken into account so as to create pleasant habitable apartments despite the immensity of the rooms.

The decorator, Camilla, bought objects and furniture, from Hungerford, a village in the South of England, renowned for its antiques. She also found antiques in the region of Fontainebleau.

Of course, the rooms have lost their original vocation but Camilla and Dominique Imbert decided to recreate, especially in the Ecurie, a stall inspired from drawings found in architecture books dating back to the 18th century. They tried to preserve the style of the place, in keeping with the original drawings.
At the Vigie and the Tour, stone walls that created a rather austere atmosphere have been rendered welcoming with big panels of fabric.

During the troubles of the Fronde, Brie and the coast of the Marne were destructed by the Lorrains who came to the aid of the rebellious.

Cardinal de Richelieu resided here, having particular feelings for Fleury and the serenity of its gardens. He also escaped a plot conspired by the Duchesse de Chevreuse. She was well known for her engagement against the politics of the influential cardinal. It is said that the cardinal then ran away on horse to Fontainebleau. 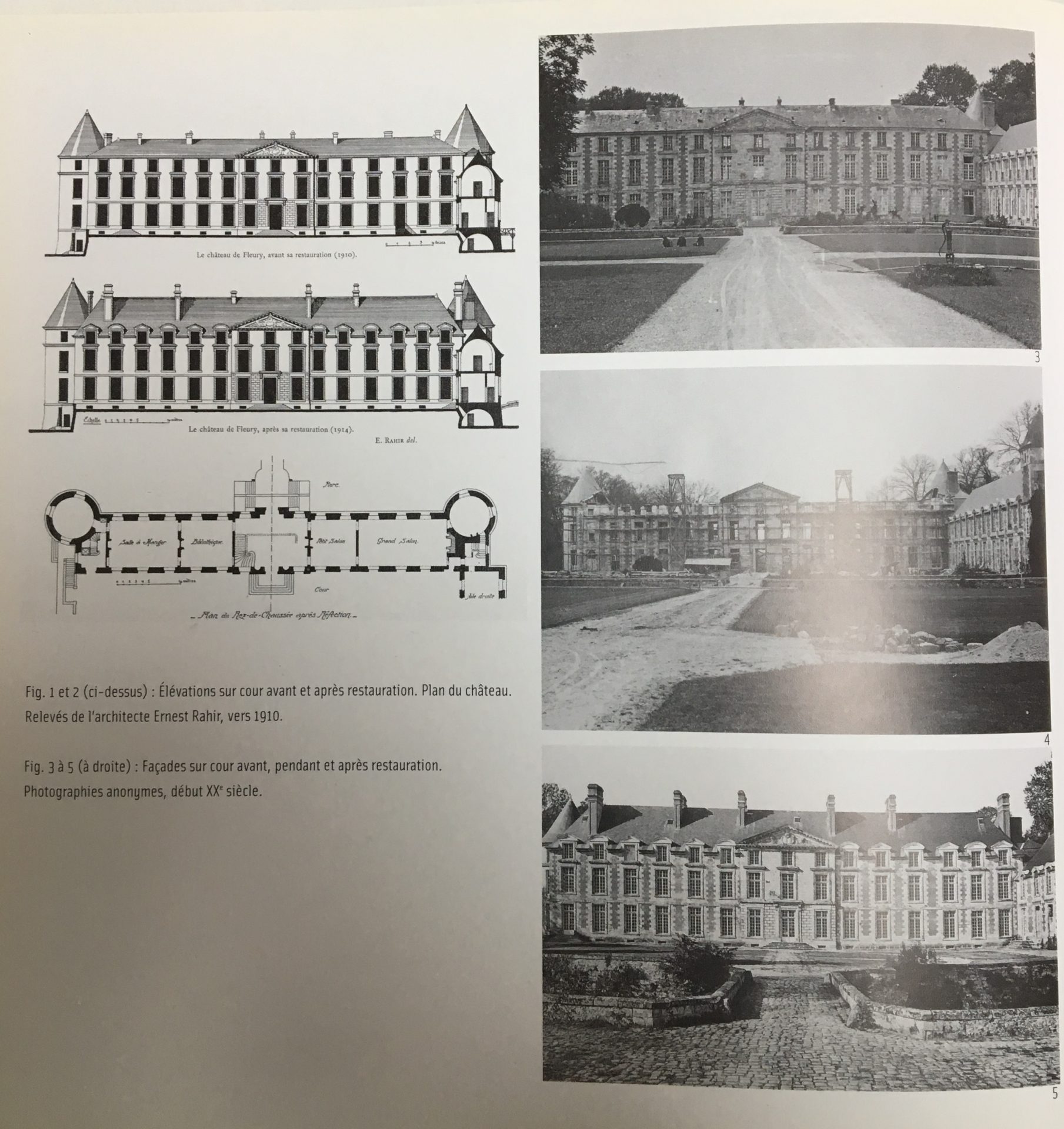