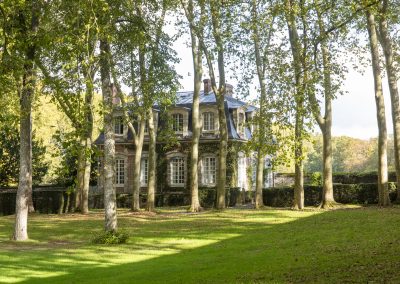 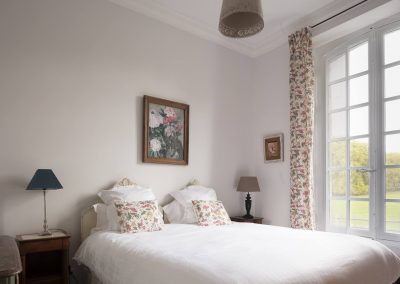 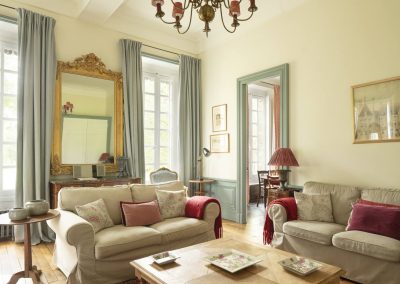 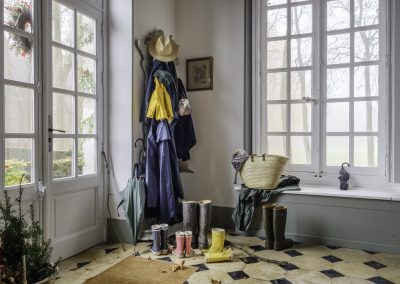 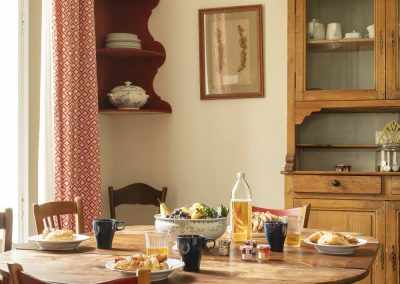 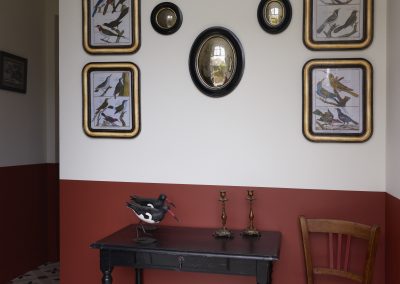 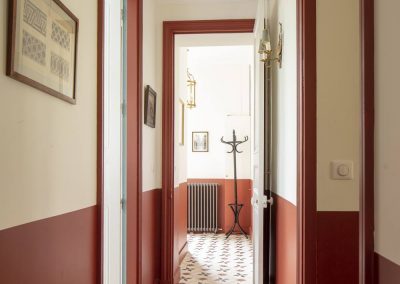 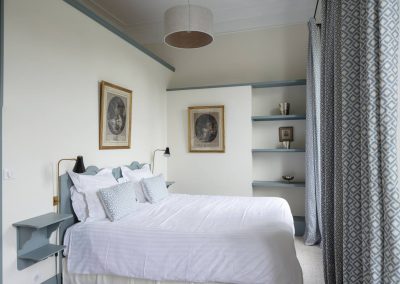 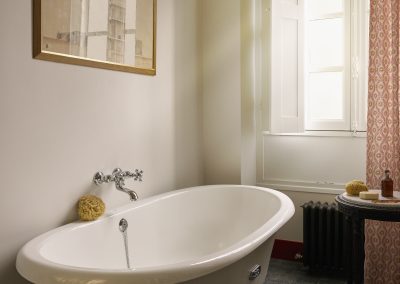 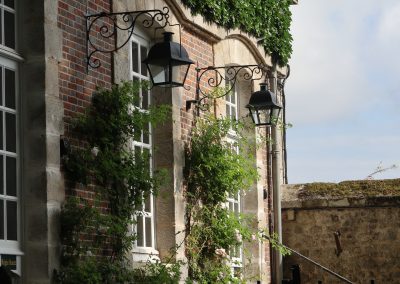 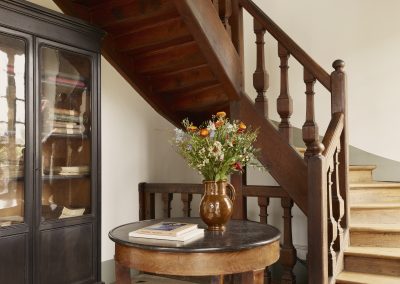 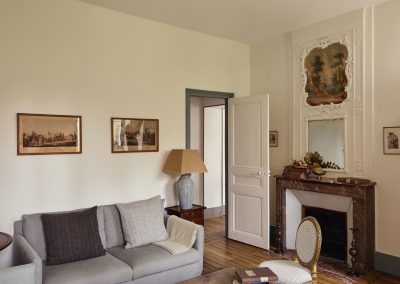 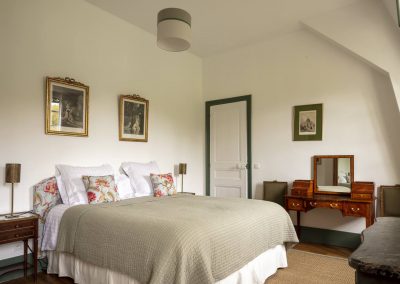 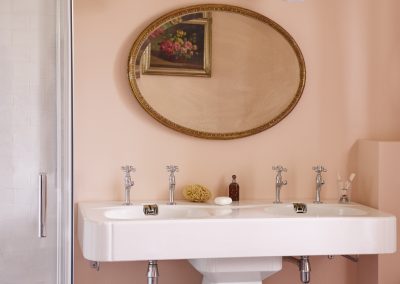 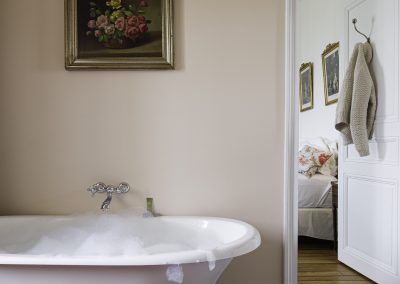 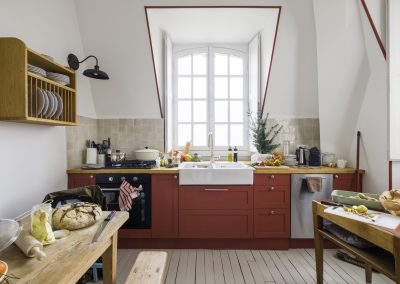 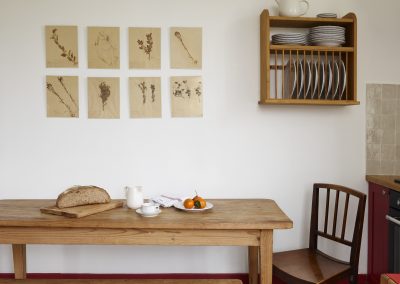 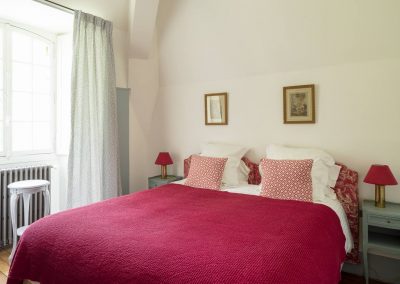 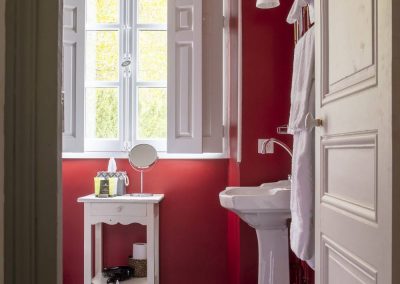 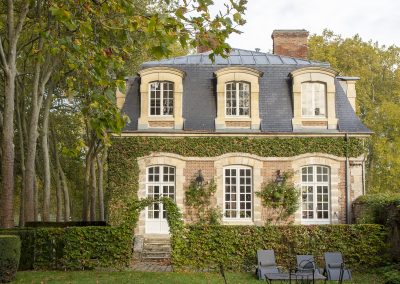 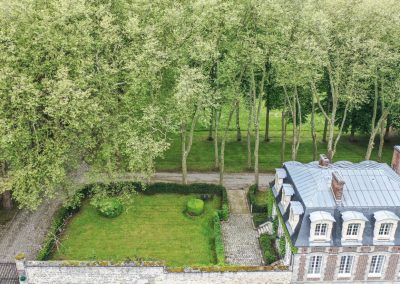 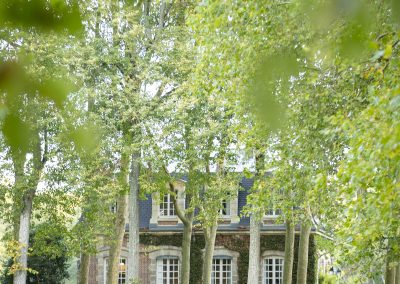 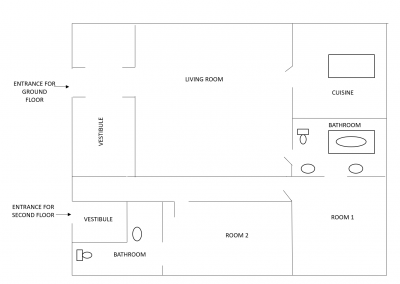 A FAMILY PROPERTY FROM ANOTHER TIME

La Regie sits proud and imposing at the entrance of Le Chateau de Courances. This vast manor at the edge of an immense park was the home of the Chateau’s manager, the second most important person of the property at the time. Today it has been completely renovated and transformed into two spacious apartments. Although they can be independent from each other, the apartments can also be connected, with the possibility of creating one big house for large family or friend reunions.
Visible from the street, La Régie is a witness of the richness and identity of the Chateau. The nobility of the house perpetuates the memory of its past occupants. The slate mansard roof, the sandstone chains, the red bricks and the very high ceilings typical of the Louis XIII period all add to create the charm. The interior decoration of la Régie is classic and sober, true to the Pierres d’Histoire philosophy. Both apartments are equipped such that it allows full autonomy. An amazing view of the Courances park creates a feeling of time suspended. You wish to organize a bigger family event? You can also book the houses of le Hameau which are just a short five-minute walk from la Régie! 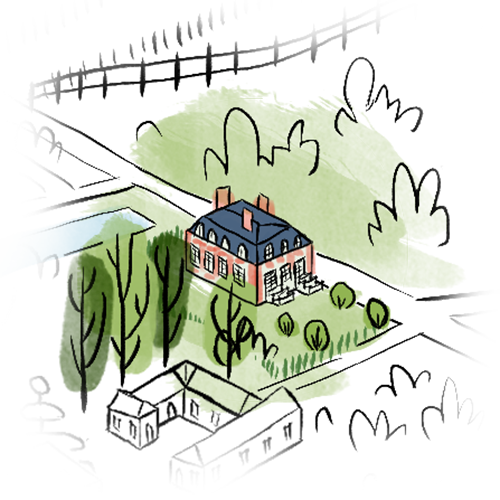 For your main grocery shopping when you arrive, head for Milly-La-Forêt. In the heart of this small picturesque village, you will find all the stores that you might need. When you need some extra fresh vegetables during the weekend, be sure to head for Boutique des Jardins de Courances, with its choice of wonderful fresh seasonal products all produced on location, in the vegetable garden of the Château.

If looking for activities, how about an afternoon of initiation in the land of illustrious Polo players? To book lessons, get in touch with Romain Darroux, Polo Manager in Courances. Perhaps you prefer to be standing up? Well how about trying out your golf swing at Golf du Château de Cely, a ten-minute car drive.

To make the most of the great outdoors, you need not go far; the surrounding fields are perfect for walks. Looking for an unusual experience with your children or teenagers? Take them to the Rosa Bonheur museum workshop. This out of ordinary house and the fabulous history of its owner will captivate one and all! And why not take pottery lessons as a family with Christine Charles in Milly?

If you admire castles, do not miss Fontainebleau and Vaux-Le-Vicomte. For the gourmets, be sure to sample the delicious fresh cooking of the restaurant Les Coqs de Milly-la-Fôret. If you wish to try a one-star restaurant you must go to L’Axel in Fontainebleau, a French restaurant but with a twist of Japanese influence.

When in Milly be sure to discover or rediscover the inventive artist Jean Cocteau. By visiting his last home, open to the public, you can admire his unlimited creativity that has left us such a surprising heritage. A little further, the Paul Bedu gallery, presents, amongst other things, a collection of lithographies, drawings and ceramics decorated by the artist. This was donated to the town by Karsten Butt, a German antique dealer. You can also find around ten lithographies and serigraphies signed by Nikki de Saint Phalle.

Built at the entrance of the Château, the Régie was to show off the wealth and status of the Baron. The desire of nobility and luxury is explained by the wish of showing his social status through the ownership of land and property. In this manner his status changed from an industrial to that of an aristocrat.

Till 1987, the Régie always had a manager living and managing the estate
Historically, they are the most important person after the owners, as they are in charge of the finances and the management of the staff as well as that of the buildings and the annexes.

The architectural neo Louis XIII style of the Régie is characteristic of the huge work Baron de Heber undertook with his architect friend and renowned historian Hyppolite Destailleur.
The Régie became known as “a castle of bricks with stone corners” a style using the esthetics of fake red bricks. It deployed high ceilings with moldings and skylights and slates. In addition to the restauration work of the buildings, Hippolytes Destailleur did a numerous amount of reorganization work in the garden with the aim of bringing back its splendor.

The primary goal for the Régie, already particularly sophisticated with its high ceilings and marble fireplaces, was to be reorganized in a contemporary way and yet keep the feel of authenticity. Régie, although always having been lived in, had become rather dilapidated, especially the windows (damaged during the two world wars) and its electric system. A new layout had to be thought out so as to create two communicating apartments with a kitchen and a bathroom.
During nine months, the current administrator, Patrick Deedes and Manolo Da Silva, the manager, supervised the construction site of about ten tradesmen such as plumbers, electricians, carpenters, painters etc…in order to see through the project.

The main constraint in the planning project was to create two communicating apartments with a real autonomy between the two floors without disrespecting the structure of the building. All the elements belonging to the building have been kept: the moldings, the old doors, the wood floors and the fireplaces. On the first floor, the outside pruning of trees has enabled to bring in light. Most of the furniture are from the Château such as the chest of drawers, the mirrors, while other pieces have been bargain-hunted.

Pierres d’Histoire wished for the interior decoration to be sober and classic, inspired from the original interiors of the castle. Patrick Deedes chose to add just a few contemporary and modern touches, which can be noted in the kitchen for example. 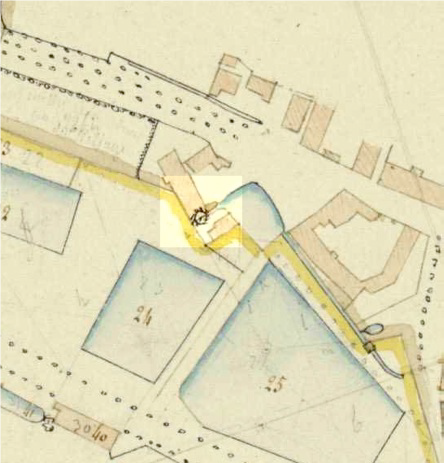